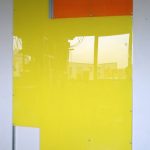 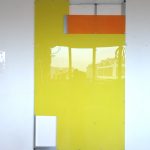 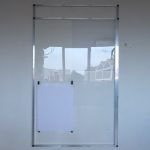 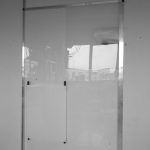 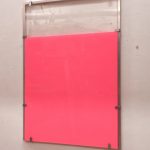 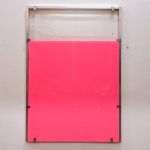 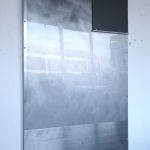 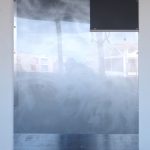 Aluminium frames, pieces of Perspex (either transparent or painted on the back), PVC, PC. A sweep of paint, a sprayed line, a painted folded piece of paper, a translucent canvas… The Coopérations bring together all these components in a combined set of simple strokes. The different actions and materials work together within the structure of the picture created by the aluminium frame. The spectator’s seeing then becomes palpable.
Transparency is seen as a dynamic condition of the vision of painting, the gaze that crosses it. A great modern principle defines painting by its opacity, the fact that it is created practically layer by layer. This key fact allows no material exception and has a unique relationship with the construction of the visible, which is traditionally associated with painting.
The gaze comes and goes between the transparency of the Perspex, the visible frame, the gaps in the structure and the relative opacity of the painted material, which lets us glimpse behind the white wall. The reflections create the depth of the different planes and hint at a movement in space required to perceive the whole.
Cooperaciones can be found in the different parts: the components that make up the picture, the materials used, the internal logic of its assembly and the different paint strokes inscribed there. But there is also cooperation between the context containing these components and the spectator’s gaze, in a complex process that never ends because it is constantly changing and entails physical and mental movement.This is one of the reasons why the Coopérations are—almost by definition—incomplete, although once the pieces leave the workshop this physical process of formally shaping the object stops and stands still, waiting to be reactivated in an exhibition space.Transparency versus opacity is an old opposition in painting which might recall another exacerbated opposition found in today’s financial markets. And on the same plane of analogies it also evokes the fact that in economics, cooperation is defined mainly in opposition to competition—which in itself constitutes an excellent reason to paint here and now.